A land highly rich in cultural heritage, Switzerland celebrates cultural and traditional events throughout the year. The 8 traditional events listed below has provided the most jaw dropping experience for our visitors, when add into our uniquely tailored sightseeing programs. 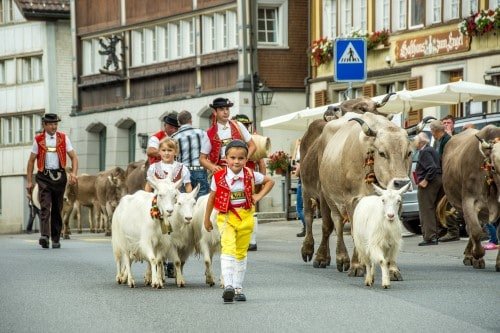 The Alpabzug which is referred to as ‘cattle drive’ is one of the most famous traditional mountain festivals in the alpine regions of Europe. During the summer, throughout the alpine regions of Switzerland, some 350’000 cattle herds feeds on the alpine pastures, very high up in the Alps. Thus, in autumn and between the end of September and beginning of October, there’s usually one concerted cattle drive, bringing back the cattle to their barns down at the village. The cattle are beautifully decorated, and such cattle drive is celebrated with feasts, drinks, music and dance. Upon arrival of the castles, joint herds from multiple farmers are identified in the Viehscheid and each animal are then returned to its sole owner. This alpine custom which is known as ‘Almabtreib’ provides an exciting, once in a lifetime experience and hence evolved into a very popular tourist attraction. Thus we keep track of this event for autumn visitors and do our best to include it in the sightseeing tour program. 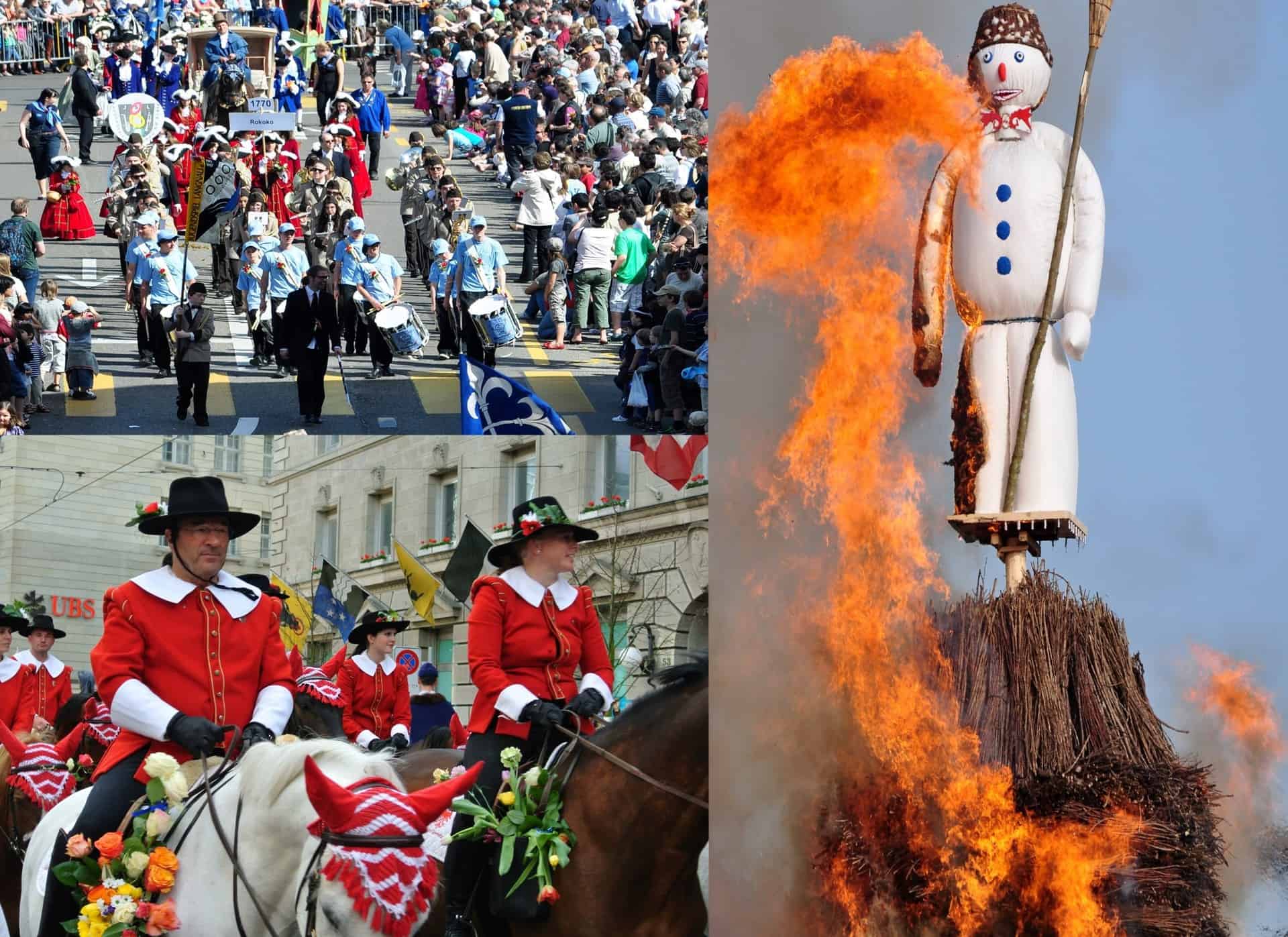 One of the biggest annual events of Zurich and one of its kind, Sechseläuten (which literally means “The six o’clock ringing of the bells”), is a festival that occurs in Zurich every year on the third Monday of April to bide farewell to the winter and welcome the spring. The festival relates back to the working hours of Zurich’s most powerful trade guilds during the 16th century period; the guild workers laid down their tools to finish work at 5 PM during the winter time and 6 PM during the summer time, when the day had been longer. To mark the change in the timetable, the bell of the Grossmunster, the biggest church of Zurich ring at 6 PM on the first Monday of Spring equinox, which later changed to the 3rd Monday in April during the. Changing to the summer working hours traditionally had some joyous occasions as people still be able to catch some day lights after work and during non-working hours. The festival is a traditionally significant also for high officials and prominent figures to attend the celebration and watch the burning of the snowman or the “Böögg”, which kicks off at 6 PM.

Fun to watch: Burning of the Böögg

The Bogeyman or in Swiss German “Böögg” is a type of mythical creature used by adults to frighten children into good behaviour. The Böögg is the main protagonist of the festival and burning of the Böögg snowman serves to drive out the winter and welcome the spring. During the bygone days, the boys of the medieval Zurich’s Kratz would burn the Böögg like figures (not one but several) on the day of vernal equinox and at the same time the guilds would start their Sechseläuten celebration. However, before being burnt, these bööggs would be tied to a wagons and pulled through the streets, accompanied by cheering youths. It was however not until the 19th century that the two customs (Sechseläuten and the burning of the Böögg) became a combined celebration. Thus during the festival children’s parade takes place on Sunday, resembling the process of the youth and the Sechseläute is held on the following day, Monday and ends with burning of the Böögg at 6 PM. It is believed, the faster the fire reaches the snowman figure and his head, which is filled with firecrackers explodes, the finer the summer will be. 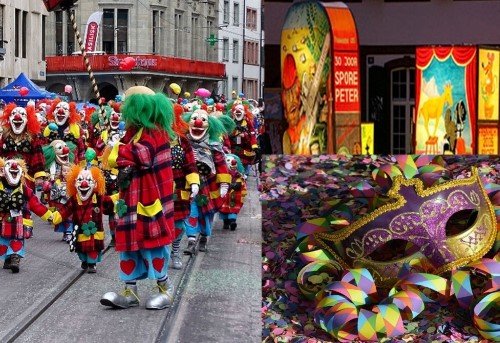 With some 15’000 to 20’000 masked participants, Basel Carnival or best known as “Basler Fasnacht” takes place in February in the medieval town of Basel. Basel Festival marks the city’s identity and due to its authentic traditional practice, has been added to the list of the UNESCO Intangible Cultural Heritage.

The colorful celebration begins in total darkness on Monday after Ash Wednesday at 4 AM and lasts for exactly 72 hours, ending on Thursday morning at 4:00 am. As the festival kicks off when the clock clicks 4, the groups of fifers and drummers dressed in costumes and masks start strolling through the town, playing carnival tunes. The carnival groups, carry around huge lanterns made from wood and canvas, many exceeds 9 feet tall in heights. They tunes of the carnival are popular tunes from previous decades but sometime new ones are also added to the list.

Additional information about this fascinating event can be found on here: https://www.basel.com/en/carnival-in-basel 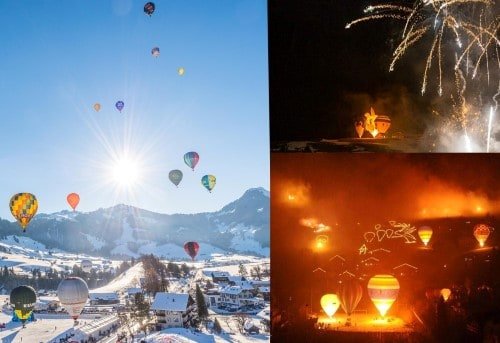 Since 1979 the International Hot-Air Balloon Festival attracted the enthusiasts and visitors from world over to visit the little French speaking village of Château-d’Oex, Canton Fribourg in Switzerland. The festival that begins usually on the 25th of January and last till 2nd of February surely is an once-in-a-lifetime experience and a very special day for the children.

Looking up in the sky that’s crowded with balloons of every colors flying slowly over a blue sky and snow-capped stunning Swiss mountains is truly quite a spectacular sight. Nearly hundred balloons from over twenty countries take as well as the para-gliders; the visitors can also book a balloon flight to taste the experience; a highlight of the festival is the Night Glow event after dark where some 20 illuminated balloons and para-gliders fly to a musical soundtrack.

More information on this event can be found on the official site here: https://www.chateau-doex.ch/en/Z4237/festival-des-ballons-homepage 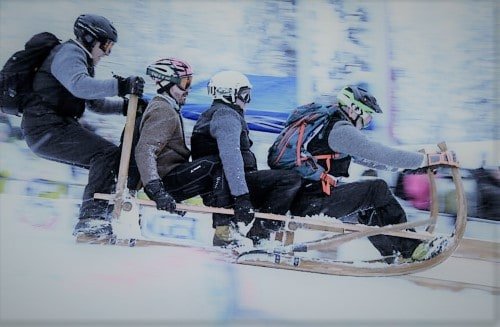 Between January and February, Horn Sled Racing takes place throughout many alpine regions of Switzerland, Graubünden, Glarus (not too far from Zurich), Bernese Alps and are a very popular thing to watch. From a traditional perspective, the horn sledge (also called Horner or Horen) is a special sledge and was originally a work tool (winter wagon) used by mountain farmers to transport their hay from remote alpine huts down into the valley or to transport felled wood to the farm. In fact, there wasn’t a farming family that didn’t own at least one. Nowadays however, the artfully crafted wooden vehicles are hardly used for transporting goods or people; it’s all the more fun to thunder down a steep descent with the sledge – a race that’s done out of fun and for the joy of competition of the unusual. The most daring teams of two or more (men and women) descend at a speed of up to 90 km/h (60 mph) and compete fiercely for the first place.

The largest race locations are listed below:

Close to region of Chur 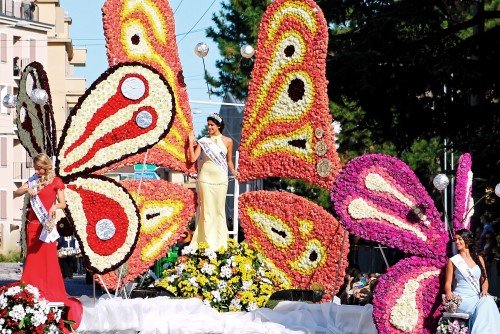 For over a century now, the city of Neuchatel in the French speaking part of Switzerland has been hosting grape harvesting festival that’s truly amazing and must see event if you are in the region. On a long weekend in the last week of September the start of the grape harvesting is celebrated and for 3 days the traffic is completely banished from the city centre.

With up to 340,000 people taking part over the three days long festival, the Grape Harvest Festival in Neuchatel is one of the largest wine festivals in Europe and is a popular festival that celebrates the sort of heritage that most Swiss can identify with: good quality wine!

The floral procession at this festival is the major highlight and every floral procession is uniquely decorated. On Friday groups in colourful costumes plays the “Guggenmusik (happy tunes)” on Saturday afternoon, children wearing fancy and colourful dresses is impressive and joyful to watch; additionally, Saturday evening the musical fireworks over Neuchâtel’s waterfront set the lake on fire. On the last day (Sunday), visitors can watch Miss Neuchâtel Grape Harvest Festival, enjoy the music provided by carnival marching bands and of course, taste the wines served up by local vintners. Moreover, the confetti cannons will rain down colours over some 30,000 spectators. 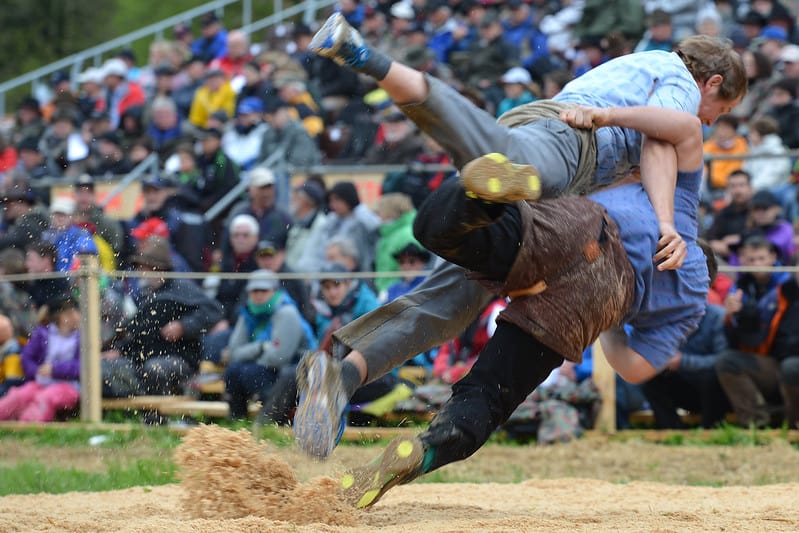 In July the Queen of all mountains Rigi celebrates Rigi Schwinget festival, one of the oldest alpine festival in Switzerland. It’s a traditional event where wrestlers demonstrates their wrestling talents, alphorn blowers, flag throwers, alpine farmers, the yodelers and the whip crackers celebrate their tradition with folk concerts. It’s best to be informed of the date and event schedule directly on the official website of Rigi-Schwinget at: http://rigi-schwingen.ch/. The site is German only but easy, there’s a google translate). 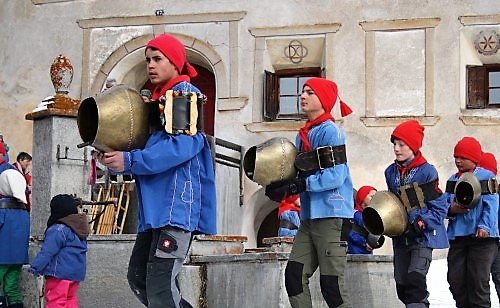 Chalandamarz is a traditional spring festival held in the Latin-speaking parts of Swiss canton of Graubünden, Chalandamarz goes back into the Roman calendar; “Chalanda” referring to “the first day of the month” and “Marz”, the month of March. Thus on the first day of March each year, Chalandamarz is celebrated to mark the end of winter in the Romanish speaking region of Engadin, Posterior Rhein, Val Mustair Albula and as well as in the Italian speaking region of Grisons. The variety of the Chalandamarz traditions of the different villages reflects the diversity of the region of Graubünden.

Wherever the Chalandamarz is being celebrated, the key elements like songs, ringing cowbells and a joyful children’s ball with dance and music takes over as the central role to chase away the evil spirit of the winter whilst welcome the colourful spring. The so called the “Patruns” (lead patrons) the oldest school leaving boys, who are due to leave school at the following year would usually lead the procession of Chalandamarz. They march around the village fountains, and go into the old houses and sing followed by some whip-cracking. Later in the evening there’s a feast with dance with the maidens of marriageable age.  Traditionally the girls don’t participate but in some villages, the girls carry baskets around collecting money while in some villages, they carry bells as well. These days of course, the children and people of all age are welcome to attend the celebration.

If you are planning to attend the Chalandamarz event or visit the region of Engadin with family or children it really worth checking out the famous hiking trail of Schellen Ursli Path. The tale of Schellenursli (A Bell for Ursli) remains one of the most popular children’s stories in Switzerland.

The custom which follows this trail describes is extremely well known throughout this part of the world: the traditional Chalandamarz where the children ring large cow bells to drive away the winter. The Schellenursli Trail in St. Moritz leads from Salastrains to the Heidi hut and then on to St. Moritz Dorf. This wonderful trail, designed for the children relates the story using pictures and wood carvings, and takes only 45 minutes to cover. The scenery along the way is extremely enchanting – as you might expect of a trail that is very much devoted to such a popular children’s story.